Some sites that I’ve enjoyed recently.

Macon Dinner – My life in food Lots of great-looking and innovative dinners.

Grill Knuckles Another Egger. I can relate to the singed hair.

The Pioneer Woman – Plowing through life in the country… one calf nut at a time Why didn’t anyone tell me about Ree sooner?!? Great recipes, even better photos, and a wonderful take on life.

Foodbuzz – food blog community Chris at Nibble Me This turned me on to this excellent resource for food bloggers.

Beef tri-tip is one of my favorite roasts. It’s inexpensive, and because it comes from the bottom of the sirloin, it’s got great beefy flavor while still being lean and tender. I usually just season it with salt, pepper, and a little garlic; but this time I wanted to spice things up and go with a West Indian theme.

Combine all of the ingredients, except the beef, and stir until the sugar has dissolved. Put the beef in a Ziploc bag and cover with the marinade. Squeeze the air out of the bag and seal. Marinate in the refrigerator for at least 12 hours.

Set the grill up for an indirect cook over medium-high heat (about 400°F). This cut is so lean that you really don’t want to cook it much beyond medium-rare. Cook the roast for 30 minutes. Flip, and continue to cook until the internal temperature hits 125°F, about another 20 minutes.

Remove the roast to a carving board and tent loosely with foil. Let rest 10 minutes. Slice across the grain and serve with more Pickapeppa sauce on the side.

Spring here means that asparagus makes an appearance on the dinner plate about as often as I can get it. Here I paired it with a simple sirloin and a baked potato for the perfect Sunday dinner.

I trimmed the asparagus and started it marinating in one glug of olive oil, 2 glugs of balsamic vinegar, a squirt of dark mustard, and a dash of kosher salt.

This dry-aged sirloin just needed a light coating of olive oil and a bit of kosher salt and fresh-ground black pepper and it was ready for the grill.

I grilled it over the hottest part of the grill for 90 seconds of undisturbed searing. I rotated it 90 degrees and gave it another 30 seconds. I flipped the meat and repeated the process on the other side.

I shoot for medium-rare with steak. So after I flipped the steak I checked the internal temp. When it hit 125°F internal (about another 30 seconds), I pulled it off the grill and onto a warm plate and covered it with another plate, and let it rest while I grilled the asparagus. 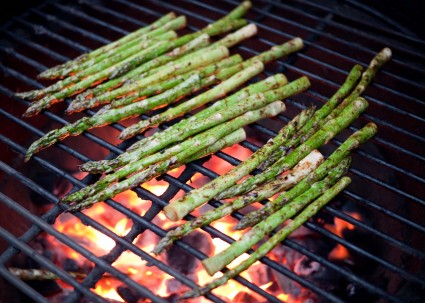 I left the lid open and grilled the asparagus for about 5 minutes, turning frequently, until the spears started to brown and caramelize.

It was still a little too cold to dine al fresco, but Spring’s longer days meant I could actually see what I was grilling ;).

I have a big cook coming up – 8 butts worth of pulled pork for a crowd of 120. I plan on doing them 4 at a time on my Big Green Egg. In preparation, I’ve been playing with ways at cutting down my cooking time without affecting the quality of the end product.

A typical boneless pork shoulder roast (Boston butt) runs 8-10 pounds and takes about 2 hours per pound to cook at 225°F. So I’m looking at 2 x 16-20 hour cooks. For this cook I wanted to try cutting the butt in half. This increases my surface area, meaning more bark (the tasty dark outside, a good thing), greater chance of drying out (a bad thing), and only an 8 hour cook (a very good thing).

The night before, I cut the butt in half and dusted it heavily with my basic pig rub. I wrapped in in plastic wrap and let it sit in the fridge overnight.

The next morning I set up the BGE  for an indirect cook of at least 10 hours at 225°F. This meant filling the firebox with lump and using a platesetter and drip pan to diffuse the heat. When the cooker was up to temp I added some chucks of guava wood for smoke.

I put the 2 butt halves (cheeks?) on, making sure to leave some space between them on the grate so they didn’t act like one big piece of meat.

6 hours into the cook I started checking for doneness. Pork butts are done when the collagen and connective tissue has melted into tasty gelatin and the meat literally starts to fall apart. I let these get to 190°F internal in the bigger half, then wrapped them together in a double layer of heavy duty aluminum foil and put them back on the cooker for another hour or so until they reached 210°F internal.

I took them off the cooker and let them rest in the foil for an hour. When they had cooled a little,  I pulled the meat apart using a couple of  bear paws to separate the fibers. The idea is to remove all the remaining inedible bits, break the meat down into bite-sized pieces, and ensure an even distribution of the chewy bark. I added a little Lexington finishing sauce as I was working with the meat to help keep it moist.

The end result was very tasty, and (aside from more chewy brown bits of bark) not much different from other batches of pulled pork that I’ve made in the past with whole butts. I got both the shorter cooking time and more bark, so win-win ;).

The only downside was that 2 halves took up more room on the grate than 1 whole butt would. That may end up being a problem when it comes to trying to stuff 4 butts into the Egg. But even if that’s the case, this was still a great way to put pulled pork on the dinner table without having to do an all-night cook.

Tuna is one of those great, simple dishes on the grill. The key to this recipe was the infused olive oil I marinated the tuna steaks in. It gave them a great, deep flavor and kept the meat moist without overwhelming the tuna.

Loin steaks like this taste better to me if you treat them like beef steaks – hot, fast, and no more than medium-rare.

Lay the tuna flat in a small container. Liberally coat all sides of the tuna with the olive oil. Season lightly with salt and pepper.  Cover and refrigerate for at least 2 hours. Remove the steaks from the fridge about an hour before you plan to cook them.

Get your grill hot – 600+°F. Brush a little oil on the grate and preheat it. You want everything on the grill to be sizzling hot.

Grill the steaks for 30 seconds to a minute per side. Rare tuna will be quite soft, with just a little resistance at the surface; medium-rare tuna will be gently yielding; and medium tuna will be firm. Anything past medium is going to start to dry out, so it’s best to pull the steaks off the heat just before they are done to your liking and let the carryover heat finish the job.

After 4 years of cooking on my large Big Green Egg, she finally has a name – Bella.

I know, “Naming a grill? You’re nutz.” But this stout girl has made quite an impression around here. She’s cooked hams, turkeys, pizza, paella, bread, steaks, ribs, chops, roasts, burgers, brats, salmon, tuna, chicken, chili, bacon, pork butt,  lamb, shrimp, oysters, crab, and all manner of veggies – all with no complaints and a minimum of glitches.

To go with the name, I also have a new handle courtesy of the Lawn Ranger. Mike did a great job. This is one very pretty piece of oak and it fits the grill perfectly.

This hearty chowder is adapted from a recipe in the February, 2010 edition of  Real Simple. Add a green salad and this makes a great weeknight dinner.

Cook bacon slices in a large saucepan until crisp. Transfer the bacon to a paper towel-lined plate. Use the pan drippings to cook the leeks and fennel. Season with 1/2 t. salt and 1/4 teaspoon pepper, and cook, stirring occasionally, until the vegetables are tender, about 4-5 minutes.

Stir in the flour and add the clam juice, milk, and potatoes and bring to a boil. Reduce heat and simmer, stirring occasionally, for 12 minutes.

We served this with quesadillas for scooping up the broth.